skip to main | skip to sidebar

Short and sweet: Liverpool UP is bringing out a paperback edition of Queer Universes. It will be available in the UK in Fall 2010 and in the US in Spring 2011. Hooray!
Posted by Wendy Gay Pearson at 9:52 PM 28 comments:

If you haven't already, check this Science Fiction Studies Symposium on Sexuality in Science Fiction (a few of us have contributed).
Posted by Sylvie at 11:34 PM 7 comments:

Feminization of Science Fiction and Fantasy?

I just came across this link, that made me jump: The Feminization of Science Fictiom (and Fantasy). According to Whiskey, author of the article, women have been changing science fiction to a point that it has become almost unrecognizable and, well, it is not that it is bad science fiction per se but... and blahblahblah... (*sigh*). Maybe the author just wanted to be polemical, but he is also being very misogynistic in his text.

I do not have time to respond right now and not even to summarize the article, but I wanted to share this enlightening piece of prose, and my perplexity (to say the least), with you.

Oh, and those of you who are on Facebook can go read Bitch Magazine's reaction to it: The Spearhead on Sci-Fi: NO GIRLS ALLOWED!
Posted by Sylvie at 5:30 PM 6 comments:

Below, please find a call for papers for a session that I will be chairing at the CIEF (Conseil international d'études francophones) conference in June 2010. It is in French, but the topic (polymorph perversity in science fiction) is so close to what we are discussing here that I thought I might as well give it a try for the few fluent French readers following this blog.

Here is how it goes. 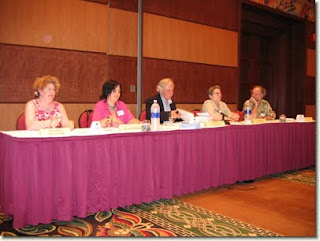 How to dream science fiction

At the end of July, while everybody was heading to Montreal for Worldcon, 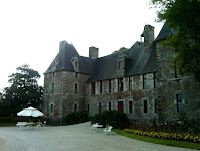 I was leaving in the opposite direction, heading to Cerisy-la-Salle, France, for a ten-day conference on science fiction under the theme "Comment rêver la science-fiction à présent" ["Contemporary science fiction dreams of tomorrows" or, literally, "How to dream science fiction at present"].

The organisers Danièle André (Université Pasquale Paoli, Corte), Daniel Tron (Université de Poitiers), and Aurélie Villers (Université de Nice), wanted to check whether SF had a future or was slowly dying. Science fiction had been the source of most twentieth century myths, it had offered a remarkable base for representation of contemporary society and helped us understand the complexity our own world, but was it still relevant in those times when reality was constantly competing with the most unbelievable scientific hypotheses, when even science seemed to have trouble renewing itself? Forty or so scholars met to reflect on the serious matter of the future of science fiction, to produce a "state of the question" of contemporary SF and to address a series of sub-questions 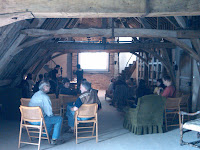 : could SF keep surfing forever on the same old myths in new, futuristic contexts? could it regenerate itself in new supports and/or in cultural contexts other than those where it had flourished during its first century of existence? hadn't the hybridation process with other genres transformed it already, and if so, in which way? where do the new models could come from? and was hybridation a sign of renewal or, on the contrary, of a profound crisis?

There probably were fewer Klingons and 3D models over there than there were in Montreal, and the panels and paper had their dark, pessimistic moments, but overall the conference was a blast. The questions were many; approaches were pluridisciplinary and not only limited to the (French) written word. Scholars came not only from France, but from the US, Canada, UK and Spain. Papers pertained to fields such as arts and media studies, la 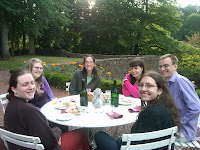 nguage and literature studies, hard and social sciences, communication, history, psychology, philosophy, etc. SF works included literature, cinema, graphic novels, animés, mangas and visual arts. The format was also different from most North-American conferences, as it was based on forty-minute papers followed by a twenty-minute discussion, which left plenty of time to satisfactorily deploy a topic, and to discuss it thoroughly. The conference also included performances, round tables, public readings of works of fiction, and film showings. The fact that most participants lived in the castle for the whole duration of the conference and so could meet between the papers and other activities, helped make this conference a real ten-day science fiction-based utopia.

I have been told that it has now become a tradition: the last ten days of July at the Centre culturel international de Cerisy-la-Salle are now dedicated to the "littératures de l'imaginaire" ["literatures of the imaginary"]. Well, that's probably not the last ten-day stay that I spend secluded in that Normandy castle, discussing outlandish matters...

PS: To take into account the core topic of this blog, I should add that the future of SF didn't seem very queer, at least based on this conference, as only a few of the papers actually covered queer topics: Margaret Galvan's paper on women only utopian science fiction and Anne Kustritz's paper on postmodern eugenism. But this is French academy, and gender studies are not as common as they are in the anglosaxon world--and it is significant that the two scholars I mentioned are from the US. Even the paper I presented at Cerisy was not really about queer or gender matters (although it is a bit unavoidable when talking about that author), as my paper was about dream as a SF topos in Élisabeth Vonarburg's fiction.

__________
For a complete list of the papers that were presented. check the conference website (in French).
For an excellent (also in French) review of the conference, check this website.
Oh, and for your information, next year's conference will be on the Western, if you so feel inclined.

Summer of the Caricature?

It will take a moment to explain what this has to do with sexuality and science fiction, but I've been struck by the extent to which new work in sf and fantasy media looks like caricature. First there was the strange caricature that is the new 'original' Star Trek film. I've no problem with using an alternative universe to get away from some of the canonical details of the original show. My problem comes when things like characterization become something sufficiently different from the original as to look like ... yes, a caricature. It's not even smart enough to be satire, which might have been more interesting.

Take the character of James Kirk, for example. On the original show, yes, he was a womanizer. The dead girlfriend of the week was an absolute cliche. But his attitude towards women, while still sexist (we're talking the 60s after all) was considerably less obnoxious and generally down market than this new Kirk. What's with the totally sexist come-ons to Uhura? Of course, that's a rhetorical question. Like Star Trek: Enterprise this new film is being made by people whose ideologies are light years removed from Gene Rodenberry's. Even Enterprise's credits were regressive and sexist. Instead of leading the pack, this film gives us a deeply conservative view of gender and sex. Uhura's completely inexplicable passion for Spock is a good example; even more so, his apparent -- but also entirely unexplained -- return of her affections. Is it so important to heterosexualize these characters that they must be rendered into mere caricatures of themselves?

Here's another example. The tv show Merlin is such an appalling caricature of anything to do with the legend of King Arthur that it's unrecognizable. Why even bother to use these names? We have fifth century characters (who may or may not have had any historical reality) transplanted to something that looks vaguely like the 12th century (judging by the use of stirrups and the type of armour and weapons). But then, even that has to be fudged because, apparently, we would be unable to admire our male heroes if they were not wearing pants. Merlin looks like he's wearing jeans under his tunic, as does Arthur. I guess real men don't wear skirts.

Sad, sad, sad. The Merlin thing could have been quite a fun show if they'd simply set it in a fantasy universe and not stolen names associated with a long tradition of myth and legend. And the Star Trek could have been great if the characters had been treated with respect and not played for cheap (and heterosexist) laughs.

Ok, I've worn out all the familiar choices. I need new reading recommendations. Any suggestions for good queer, lgbt, trans, genderfuck and so on sf books? Or almost sf books? I'm not averse to slipstream, magic realism or even full on fantasy, so long as it's well written.